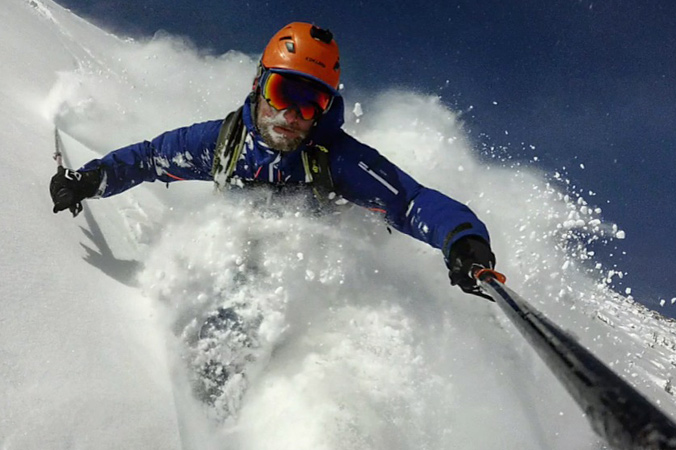 “You need to buy the ticket when you get there,” the nice woman at the bus terminal told me. The computer wasn’t letting her buy the second leg of my bus trip from Bariloche to Las Leñas, or at least that was the conclusion I had drawn after helplessly standing at her counter for 15 minutes. I didn’t say anything, but I was worried about making the second leg of my trip. My bus would arrive at the layover at 3:30 a.m. and I was supposed to embark on the next bus at 5:30 a.m., a time of day when I had a feeling there wouldn’t be anyone at a ticket window to sell me a ticket.

But I accepted my fate. I got on the bus, and as I had suspected, there was no one at the bus terminal at 3:30 a.m. To top it off, the bus was sold out anyway. So I waited until 6 a.m. and bought a ticket for the 10:00 a.m. bus. Two hours into the four-hour bus ride, we stopped in what looked like a town, or maybe just an outpost. I wasn’t sure, but there was a police checkpoint and I got picked randomly (or maybe not) for a search. They went through my bag down to the smallest thing. They looked at the little pills in my med kit; they looked in my repair kit and in my ski bag. Luckily, I don’t have time for drugs and illicit things, so after an hour-long search we were back on our way.

This seems to be the way things go in Argentina. Nothing quite works the way it’s intended to and everything takes a bit longer than it otherwise should. But eventually you end up where you’re supposed to be, doing what you want to be doing. As it was for me, five days after I left Denver, I ended up in Las Leñas with a 1.5-meter storm waiting at the doorstep.

I spent my first week in Las Leñas terrified by the massive mountains, crazy wind and relentless snow. The best I could do was lap the 1,000- to 2,000-foot foothills covered in small bushes for some contrast in often whiteout conditions. As the storm cleared to reveal a large avalanche cycle up high, I was happy with my conservative decisions and was still rewarded with some rare bluebird powder skiing.

My one-week trip turned into one month, and during that time the snowstorms became a bit more infrequent. This created stable conditions that allowed me to get into some big lines on big peaks. The highlight was powder skiing on Torrecillas above the ski area and Adrenalina, the 2,000-meter couloir off Cerro Yeseras.
I’ve been in Las Leñas just over a month now and plan to stay here for one more week. After that, I head south to Patagonia to ski the beautiful mountains outside of Bariloche.