What Gear Do I Need to Start Backcountry Skiing? 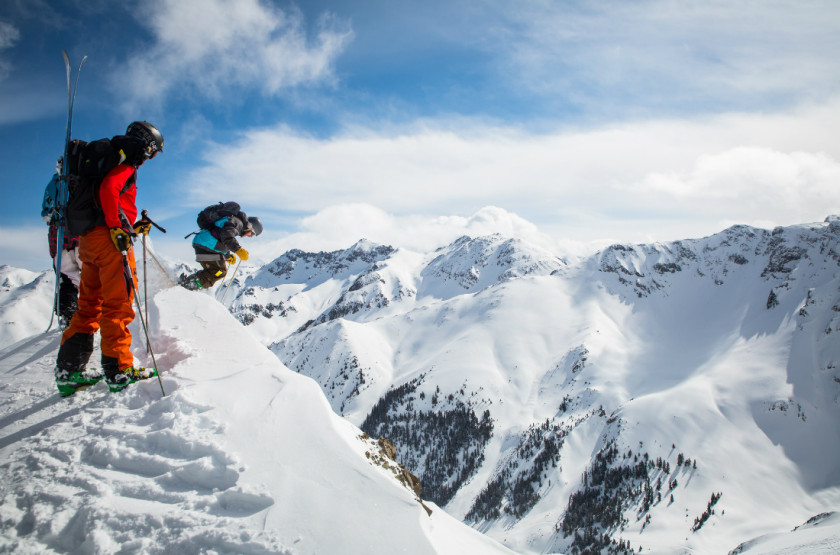 What Gear Do I Need to Start Backcountry Skiing?

A nice thing about learning to backcountry ski is that if you’ve learned to ski at a resort, you’ll likely already have some of the skills and gear that you need to go off into the backcountry. The bad part is that the gear you don’t have already gets pretty expensive pretty quick and the danger level escalates pretty dramatically in the backcountry as well.

Before we get started talking about gear, perhaps it is important to point out that there are a couple different ways to get up the hill when backcountry skiing and which way you choose will determine which gear you’ll need.

Method 1: Boot packing
Boot packing is essentially just hiking in your ski boots and carrying your skis attached to your pack. This method might require snowshoes if you’re walking in deep snow.

Method 2: Skinning
Skinning involves walking up with your skis on your feet. The skis are kept from sliding backward by the skins that are attached to the bottom of your skis. Then when you get to the top, you take the skins off before skiing down. Skinning requires that the heel of your boot is not connected to the ski so that it provides the range of motion needed to walk. More on the boots and bindings below.

CLOTHING
When you’re skiing at a resort, you can typically get away with wearing fewer and thicker layers since you’re not working as hard or generating a lot of heat to get to the top. But in the backcountry you’re working a lot harder and burning a lot more calories so you’re likely going to want non-cotton performance layers that wick moisture away. This might consist of a thin base layer, a mid-layer like a light fleece, and some sort of waterproof or resistant shell. For pants, typically backcountry pants have a bit more give to accommodate all the walking and some have backcountry-specific features like vents that you can open to cool off or a feature on the bottom that allows you to access the buckle to switch you from uphill to downhill mode (more on that later). With all that said, backcountry skiing is not an exact science in terms of clothing; you don’t need clothing made for the backcountry to go into the backcountry. Especially if you’re a beginner, you probably just want something waterproof and usually that will be the same stuff you normally ski in.
Likely investment: The whole getup might cost you a few hundred bucks if you don’t own it already.
Skimp or Splurge?: If you don’t already own sufficient ski clothing, feel free to skimp. Like we said, this isn’t an exact science.

BOOTS
It’s certainly possible to go backcountry skiing with your regular alpine boots. As we mentioned above, this will involve boot packing and it will be significantly more difficult just due to the weight of the boot. It’s also a pretty good recipe for blisters if you haven’t hiked very far in your boots before; unfortunately, your regular alpine boots just aren’t made for walking. If you’re skinning instead of boot packing, the other option is an A/T* boot or telemark* boot that allows you to change the range of motion that the boot cuff offers. These boots will be lighter and they’ll have a sole component with grip for walking on rocks or trails.
Likely investment: $300-$600
Skimp or Splurge?: Splurge. You’re going to want to be very comfortable just like with a hiking boot.

SKIS
Resort skis are going to be slightly different than backcountry skis but that doesn’t mean you can’t use the same skis in the backcountry that you’ve been using on lift-accessible terrain. Backcountry skis are just designed to ski better on ungroomed snow like powder and other uneven terrain.
Likely investment: New skis can be found at a reasonable discount if you’re willing to look around. $200-$500 is likely what you’ll spend and this does not include bindings.
Skimp or Splurge?: Skimp when you’re starting. Or just use the alpine skis you already own.

BINDINGS
If you’re boot packing, you’ll use the same bindings you always do. But if you’re skinning, backcountry bindings can get pretty complex and pretty expensive. One way to go would be to use your same alpine boots with a “frame” binding which is an A/T binding (also called Randonnée* binding) that locks around both your toe and heel and has a switch that allows the entire binding to hinge away from the ski at the toe. Then there’s the lighter, slightly fancier, and all-the-rage “tech” binding with pins in the front and notch in the back that your heel locks into. Tech bindings are going to require boots specifically designed for the backcountry and for that binding.
Likely investment: $400-$500 for both frame and tech bindings
Skimp or Splurge?: Splurge when you’re ready to graduate from boot packing to skinning.

POLES
Backcountry poles don’t need to be anything special and they can absolutely be the same poles you use at the resort. Most backcountry-specific poles are extendable to let you change the length of the poles between going uphill and downhill and they’ll be lighter.
Likely investment: You can find pretty decent, used, adjustable poles for $60-$100.
Skimp or Splurge?: Skimp. Whatever you find will be fine.

SKINS
Skins are a fuzzy, synthetic surface that hooks onto and sticks to the bottom of your ski so that you can slide forward and not back. The original skins were actually made of animal fur and thus the name. Obviously you won’t need skins if you’re boot packing. There are fancier skins that are more expensive but if you’re just starting out, you’re not likely to notice a difference.
Likely investment: You can’t go used because skins are cut specifically for each ski and if they’re used the glue that adheres the skin to the bottom of your ski is probably pretty much junk. $70-$120 for a decent new pair.
Skimp or Splurge?: Skimp; you won’t notice much difference as a beginner

PACK
What’s different on a backcountry pack? Often times, not much and you can use the same pack you use for any outdoor daytrip. Generally, you’ll want something comfortable and durable with a hip belt and a sternum strap. A 30–40 liter pack should be about the right size. If you’re boot packing, make sure you can affix your skis to your pack either through the “A-Frame” or Diagonal carry method. If you’re getting fancier, a lot of backcountry packs come equipped with airbags or avalungs. An airbag is an designed to inflate if you are caught in a slide and helps to keep you near the surface of the avalanche and more visible to rescuers. An avalung is a tube that is incorporated into your pack and allows you to breathe in fresh air and deposit CO2 behind you so you don’t poison yourself when buried under the snow.
Likely investment: $100 and up for a pack; $300 and up for an airbag; $100-$150 for an avalung.
Skimp or Splurge?: The airbag and avalung are not mandatory but if you go that route, you might as well splurge.

BEACON, PROBE, SHOVEL
These three items along with the avalanche certification below are the four avalanche essentials. So don’t leave home without them. The probe is a long collapsible aluminum and carbon fiber rod that allows you to search for people buried in the snow. The shovel is for digging people out obviously and it doesn’t have to be super pretty but you’re going to want something compact, lightweight, and strong and something made for the backcountry — not out of your garage. The beacon (also called a transceiver) sends out a signal that lets other people locate you. New, fancier beacons are available but the older technology still works fine.
Likely investment: Beacon $200; shovel $50; probe $50. Or you can rent these things at many outdoor stores.
Skimp or Splurge?: Skimp where you can find deals but make sure the equipment has held up. The important thing is that it works.

LEVEL 1 AVALANCHE CERTIFICATION
These courses are easy to find online and usually take place over a couple of days. Go with a reputable service that knows the terrain where the class is taught.
Likely investment: $250–500
Skimp or Splurge?: Just don’t skimp.

So do I need to take an avalanche class to ski in the backcountry or do I just need someone in my group to be certified?
We don’t recommend skiing in the backcountry if you’re not certified unless you’re going with a professional guide who is used to being responsible for many skiers’ safety. Being in the backcountry with uncertified skiers can be stressful on those who are certified. Then again, some folks like to “play guide.” Either way, safety is the key thing to remember.

What would a guide cost for a day?
You can hire guides for a day or a few hours. Guides will also be included with any cat skiing or heli-skiing operation. The guide alone will cost you $200–500 for a trip not including the customary tip.

What about helmets?
Definitely don’t forget your helmet! Helmets are perhaps more important in the backcountry than at a resort as a large number of backcountry injuries and fatalities are caused by head trauma.

Which of these rules apply if I’m sidecountry skiing*?
All of these things apply exactly the same except if you’re sidecountry skiing, you don’t necessarily need a mode of ascension. Skiing out of bounds is just as dangerous as anywhere in the backcountry and tons of unprepared skiers — especially in recent years — have ventured off resorts into the sidecountry and gotten into danger.

*Glossary:
A/T (short for Alpine touring): Backcountry skiing outside of a controlled ski resort boundary using your own power to get up the hill.
Randonnée: The French word for A/T.
Telemark: Skiing using a lunging or “free heel” turn. Telemarking was the original mode of backcountry transportation. Also, it’s not “telemarketing.”
Sidecountry skiing: Backcountry that’s easily accessed from a resort.