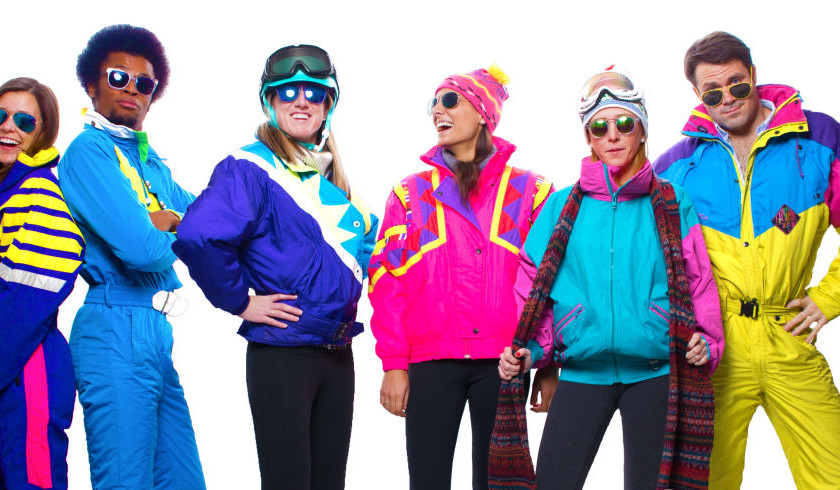 The Christmas tinsel and New Years glint has been packed away. Settling into winter’s longest stretch without the hazy mirth of the clinquant season can be disheartening. But consider this silver lining: Ski Season. A schuss down snowy slopes invigorates the spirit through bright air and long views. And for those of us less tickled by the steep side of a mountain, there is the draw of an activity that requires an entirely specialized wardrobe. It is dress defined by volume – quantity, quality, luxury and bulk. The fabrics are innovative (padding and stretch), the layers dense (rich knits, cashmeres and furs), color palettes unexpected (neons and prints), and the accessories novel (moonboots and goggles).

Skiwear is one of the most distinct categories of dress, bordering on costume. It has been shaped by two distinct influences. The first is practical – retaining warm and ease of movement. The second is economic; skiing has traditionally been a sport for the class of largesse. Ski towns developed as enclaves of the wealthy jet set, globetrotting from St. Barths to St. Moritz, Acapulco to Gstaad. The aesthetic of après ski evolved around the glamour of high society. These two disparate influences create a fascinating intersection between function and fashion. As specialized gear, skiwear has existed on the margins of fashion, yet many designers have avidly picked it up, infusing ski clothes with the style of the times. In turn, skiwear elements have seeped into the mainstream wear. Take a look at the reciprocal relationship in our history of skiwear.

The origins of skiing are found in modern day Norway and Sweden. The word comes from the Old Norse “skíð” which means, “split piece of wood or firewood”. Skiing was originally a means of transportation in a part of the world that was blanketed in an icy down for the better part of the year. The Norwegian military used skiing for training, and by the middle of the 19th century, competitions were open to the public. Recreational skiing gained popularity. An unprecedented dissemination of information in the second half of the century primed the world for the Nordic sport. At the 1878 Exposition Universelle in Paris, the Norwegian pavilion featured a display of skis that proved an instant success. Norwegian immigrants took the tradition anyplace that offered mountains and snow – the Alps, the Andes, the Rockies and the Great Dividing Range of Australia. Soon these areas would embrace the sport as their own. 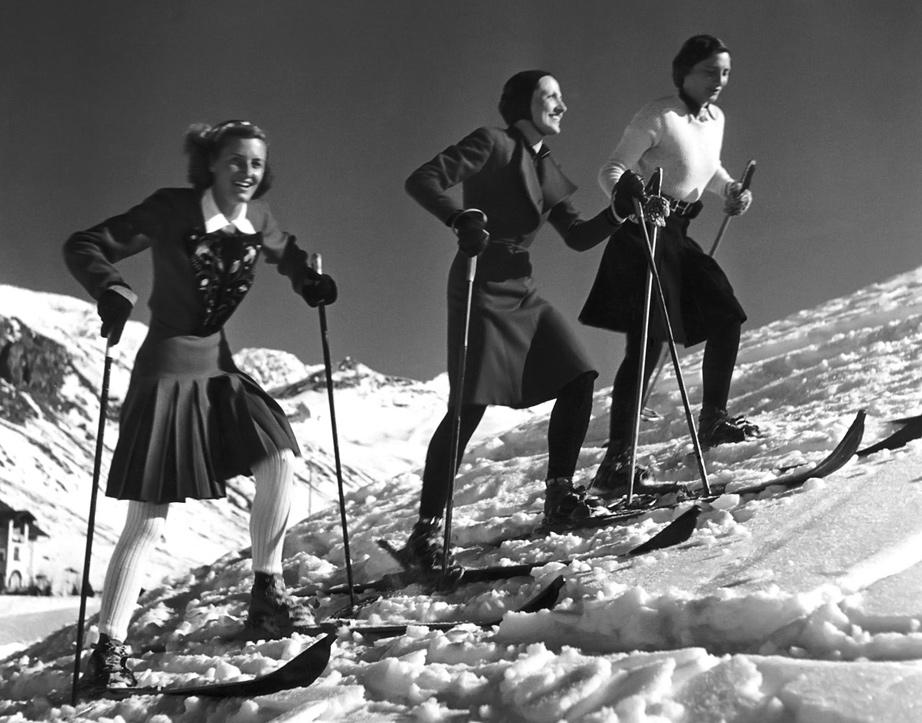 Fashion was undergoing its own change during this time. Tailor John Redfern launched a couture house that produced clothing specifically designed for sport: tennis, riding, yachting, and archery. Women eagerly embraced this departure from frou-frou and the streamlined designs, dubbed tailor-mades, were so popular they were adopted into everyday wear. The skirts worn by early female skiers were in this turn-of-the-century style, popularized by the Gibson Girl. Men’s skiwear was also influenced by current trends in cut and fabric, as well as the rugged pieces worn by mountaineers on expeditions.

If the Norwegians invented the technique of skiing, the Austrians invented its style. Mathias Zdarsky and Hannes Schneider innovated new techniques that elevated skiing to a popular competitive sport. Soon, it was virtually indistinguishable from Austrian culture, including the folk dress aesthetic. Lederhosen, trachten and dirndls were adopted into ski clothing style, along with an earthy color palette of browns, greens and reds. These were simple, practical clothes trimmed with the distinctive trim that mimicked geometric architecture and the wildflowers of the mountain meadows. Women begin to ski alongside men, and by the 1920s, many abandoned skirts for trousers (although in the late 1930s, women skiing in skirts still appeared in Vogue). The addictive sport’s appeal soon spread. As Europe’s pristine mountains opened up after the destruction of WWI, ski towns popped up across the Alps and the upperclass eagerly adopted the new sport of leisure. We find snapshots of a rugged, snowy Ernest Hemmingway in Gstaad, and the Marquis of Milford Haven escorting Princess Alexandria of Greece, her Royal Coat of Arms embroidered on her ski jack transforming through reverse livery. 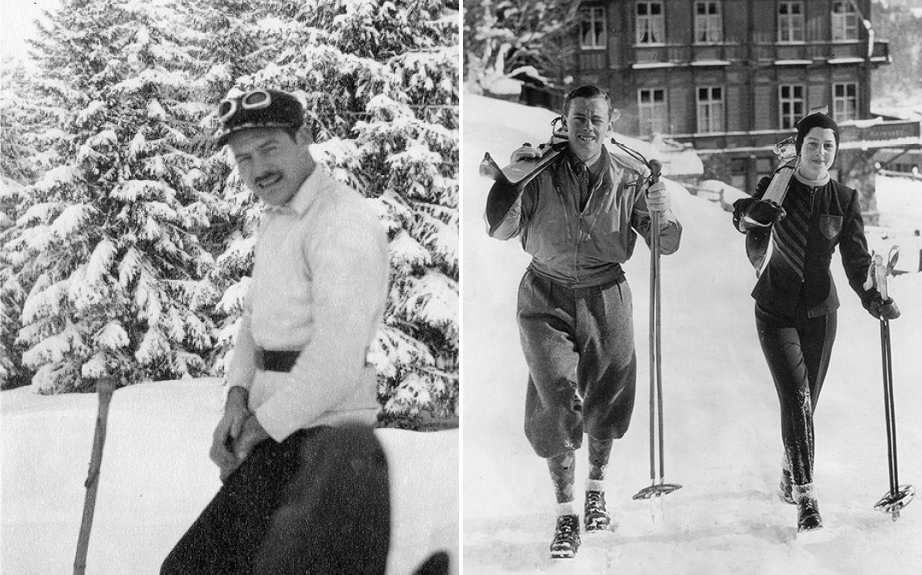 Wherever high society goes, fashion is soon to follow. The new pastime of the wealthy required an entirely unique wardrobe. Couturiers happily obliged. This period between the wars is commonly referred to as the “Golden Age of Couture” as fashion designers defined a new era of modern dress. The fashionable lady was active and sought clothes designed for comfort and elegance. Coco Chanel was famous for her dedication to sportswear, borrowing jerseys and knits from British aristocratic dress. Tennis star and muse Suzanne Lenglen inspired Jean Patou’s wildly popular sportif chic. Edigio Scaioni’s 1927 photograph of a Lucien Lelong ski suit illustrates the style of the decade– a cylindrical silhouette decorated with the gradient stripes of Art Deco, a blunt bob and the debutante slouch. A sketch by Jean Pages from 1930 includes suits by Jane Regby and Schiaparelli. The Italian designer was herself an avid sportswoman; her 1928 collection “Pour le Sport” was inspired by sportswear. A 1934 photo shows her modeling a similar ensemble alongside her daughter Gogo at society watering hole St. Moritz. In 1933, René Bouët-Willaumez captured Hermès’ ski and skating clothes for Vogue. 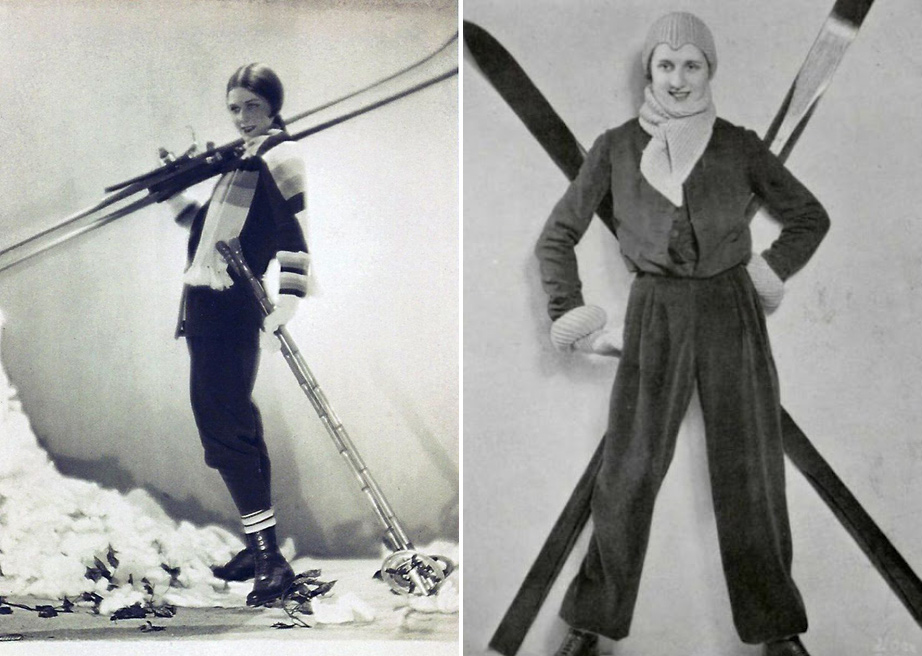 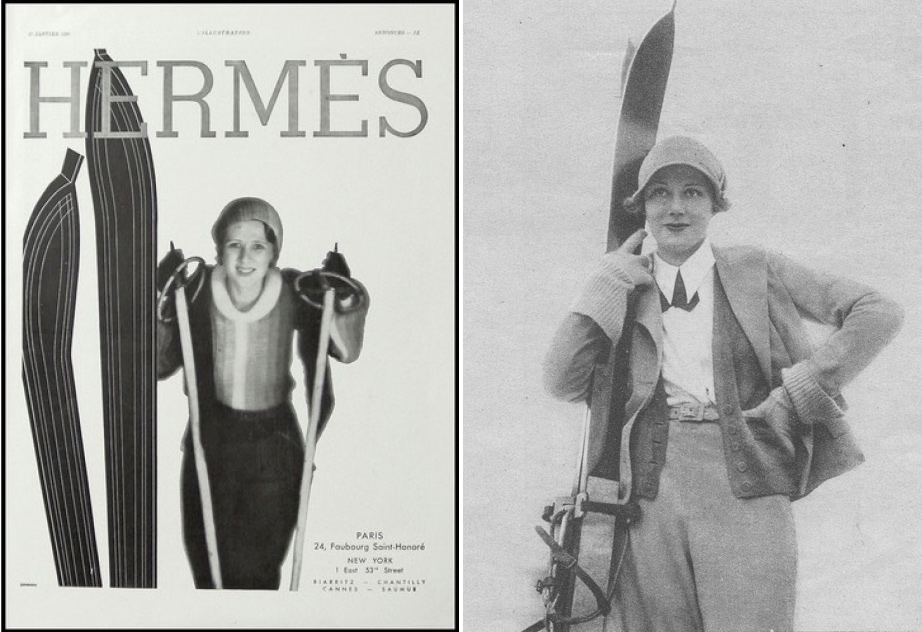 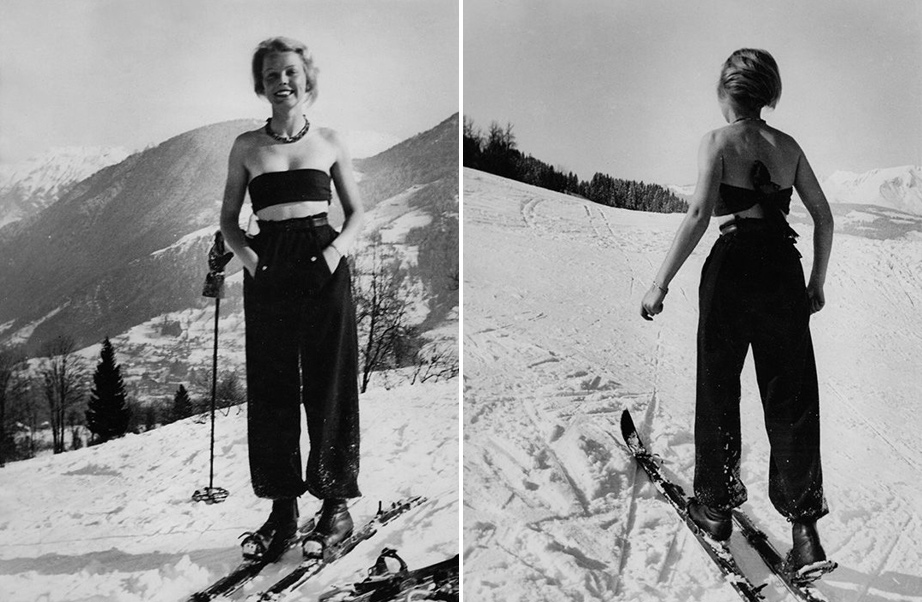