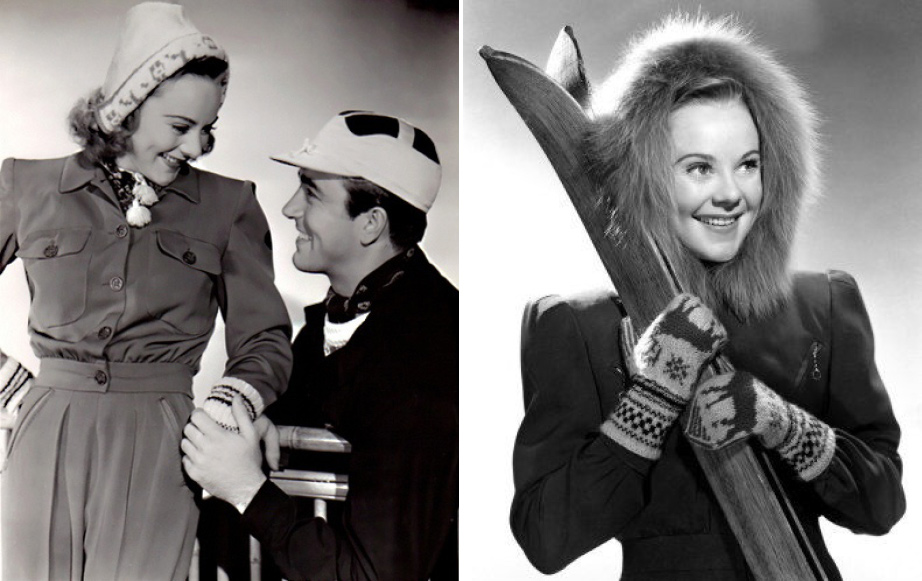 The European jet set were not the only ones to fall for the winter sport. In 1936, Sun Valley was founded, and it was not long before Hollywood came calling. Glamorous stars flocked to the charming town; Clark Gable, Gary Cooper, Ingrid Bergman, Jimmy Stewart, Mary Pickford and Norma Shearer could all be found gamboling up and down the powdered peaks. Far from the decrees of Parisian salons, the style in these western towns was dictated by the Austrian exports that had brought the sport. Lederhosen, snowflake sweaters, and tapered tweed trousers were accented with movie star signatures: mink coats, dark shades and scarves tied over sweetly curled hair. This first wave of distinct ski style was a charming, innocent aesthetic and one that is highly coveted by vintage collectors. For example, avid collector Cathy Graham remarked on her affinity for the era in an article on vintage shopping in Vogue, January 2000, “Of course, they’re wool, and when wet get all soggy, but I love them”. Materials were still traditional and natural, heavy wool and gabardine, but technological developments from the time can be found. Waterproof tweeds and Burberry cloth were first used in raincoats and ski clothes. The Museum at FIT has a 1930’s wool ski suit that is an example of an early attempt at waterproofing. The label reads “Neva-Wet”. Zippers were the newest innovation in dress and were soon added at the lower leg and pockets. One-piece suits were ubiquitous. The palette mimicked the somber dress of the era of the Great Depression: browns, greys and dark blues as a base.

During the 1940s, two-piece suits became popular and were offered in varying tones in order to break up the monochromatic look. Jackets were designed to be reversible, which allowed for variety. Upscale sporting goods companies, such as Abercrombie & Fitch, increased their offerings of skiwear. As the political atmosphere in Europe worsened, more Europeans fled, including many devoted skiing professionals. A few of these devotees carved out careers abroad as skiing authorities, combining instructor, celebrity, and sports ambassador into one. Most interestingly, it was these personalities (as opposed to traditional designers) who would dictate the evolution of ski fashion. 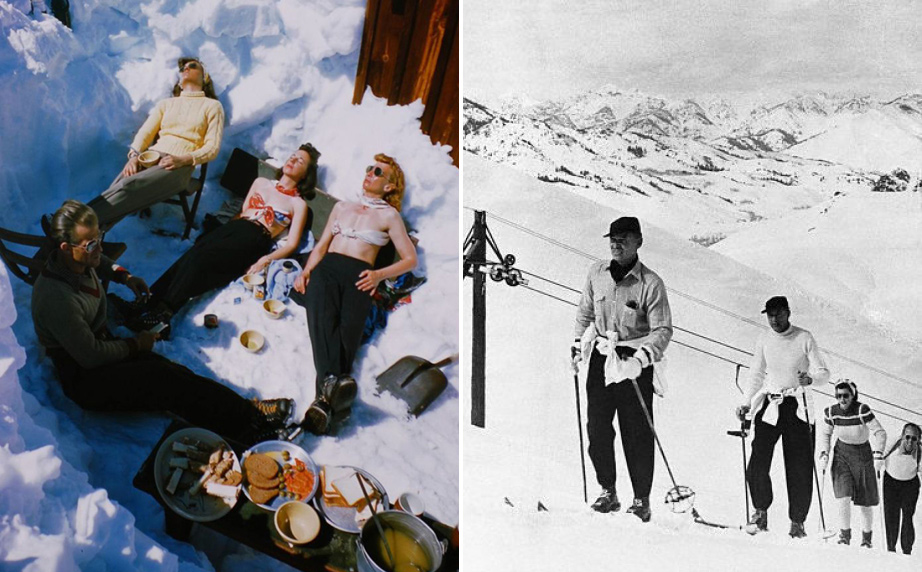 Soon after arriving in Sun Valley, Klaus Obermeyer started selling Bavarian neckties out of the bed of his truck. He tried his hand as a ski instructor in Aspen. When he began losing students to the extreme cold, he turned to his goose down comforter and invented the first quilted parka. Skiing dignitaries Ernst Engel and Howard Head would go on to design their own lines. Frederick A Pickard (“international authority on glamour in the snow”) started designing his clothes in his native Switzerland, but moved to the US after consulting on the Swiss pavilion at the New York World’s Fair. He had his own store in Sun Valley, which provided the ski clothes for the Hollywood musical Sun Valley Serenade. Additionally, he worked as a ski consultant for Bloomingdales at the opening of their Ski Shop in November of 1948. Other department stores followed suit; Abraham & Straus open their “Ski World” shop just a year later. 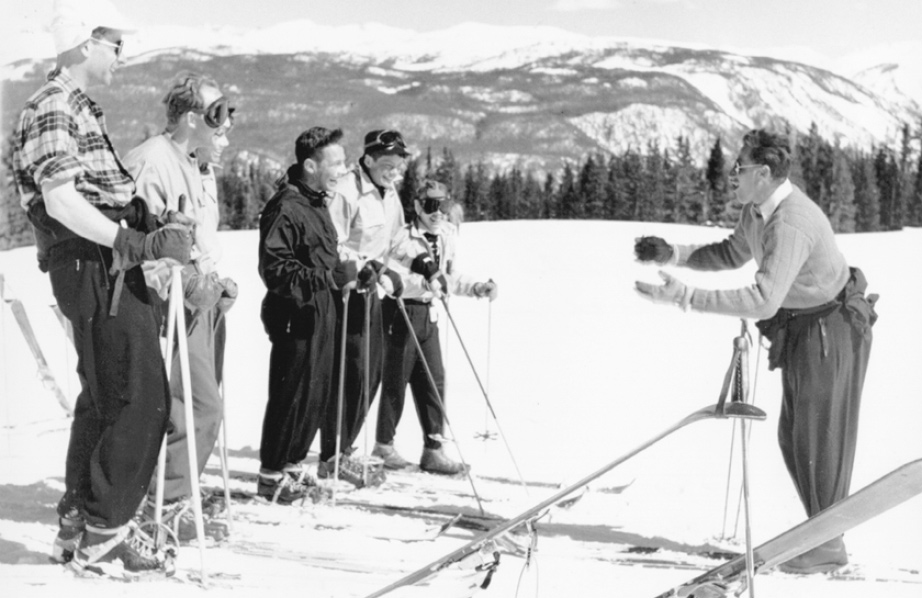 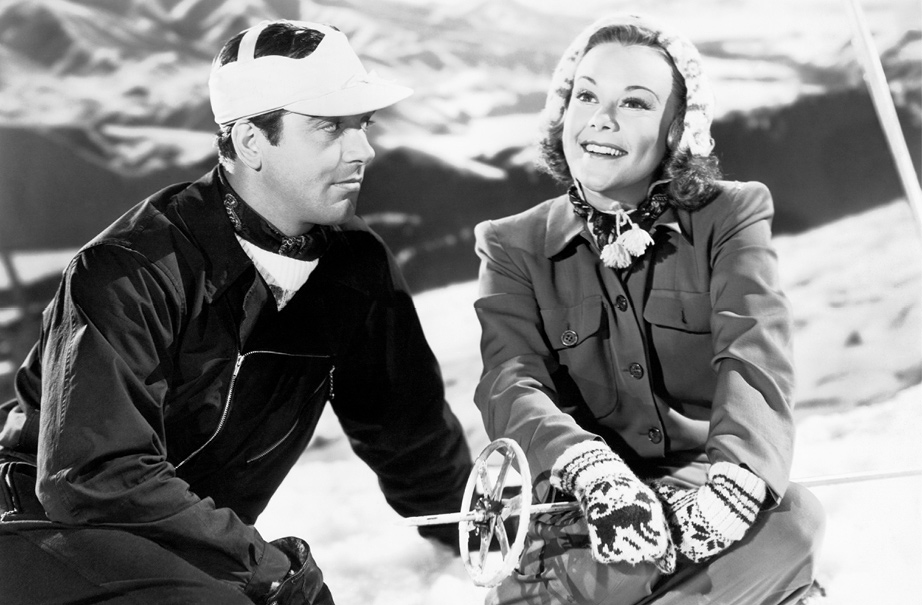 The design innovation was not limited to the men. Norwegian skater, and three times Olympic gold medalist, Sonja Henie offered a line based on her own suits. Young adventurer Ann Bonfoey picked up skiing when she moved to Vermont as a newlywed. By 1939, she had secured a spot on the Women’s Olympic ski team. After WWII, she launched a skiwear line, “Ann Cooke” and ran a shop in Stowe. Friend Diana Vreeland secured coverage of the line in Harper’s Bazaar, and Lord & Taylor soon picked it up. A new marriage and move to Texas in 1946 ended her career as a fashion designer, but she remained an avid sportswoman. She continued to have her ski clothes custom made and by the 1960s, she was photographed by Toni Frissell in her signature fanny pack, internationally renowned for her glamorous style on the slopes.

As the concept of ski as fashionable dress gained traction, designers offered chic options to round out the entire experience. From the New York Times November 19, 1948, “To relax before a fire after a day’s sport, bright colored full skirts and slacks of velvet and gabardine were favorites. A fire red jersey, its basque jacket and swirling skirt quilted, won immediate approval.” The description sounds awfully similar to Claire McCardell 1940’s Après Ski design – a stunning quilted wool jersey skirt in fire engine red offset by a wide cotton midriff in black and accompanied by an matching jacket featuring an ample collar and tapered sleeves.

CLICK HERE TO GO TO HISTORY OF SKI WEAR – Part One