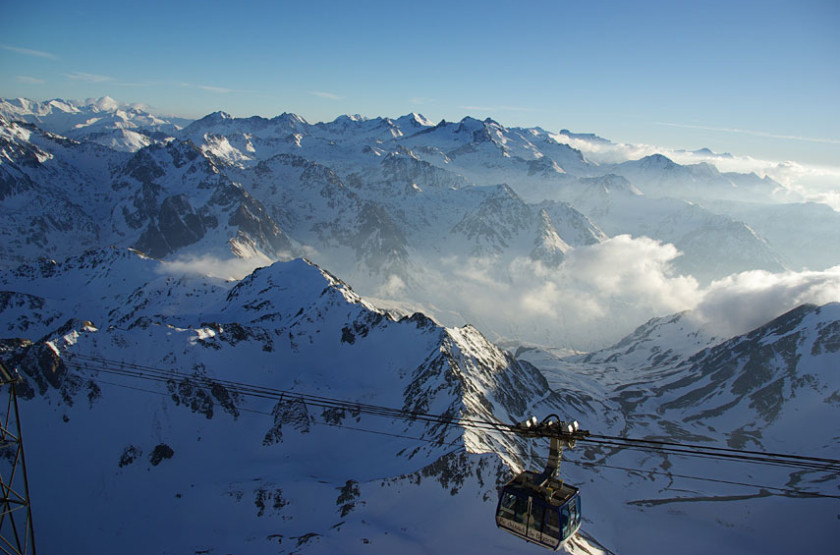 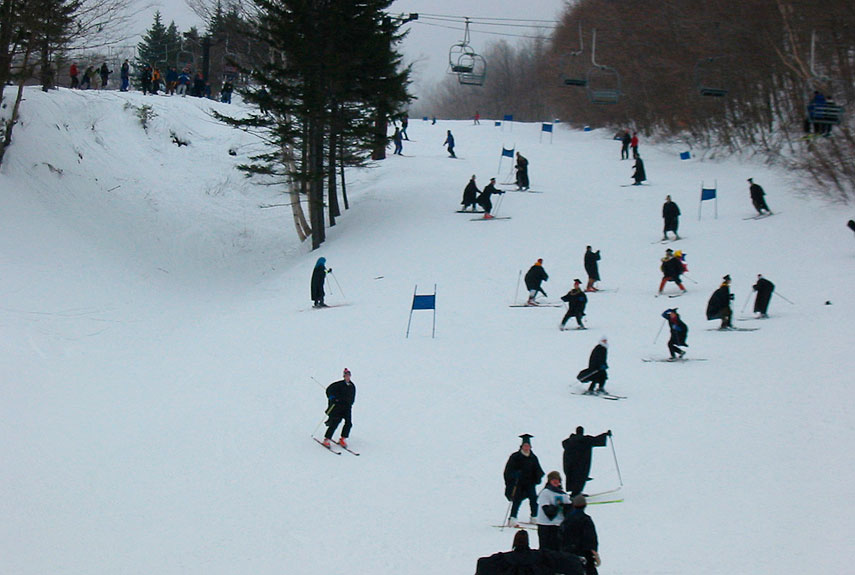 Middlebury Snow Bowl
Middlebury, Vt.
Background: Middlebury College, founded in 1800, has owned the Snow Bowl since trails were first created there in 1934.
Why It’s Unique: Only two colleges in the eastern U.S. still own ski areas, making the Snow Bowl a unique source of pride for the school. Snow Bowl Patrol is entirely staffed by student volunteers, who must receive both National Ski Patrol and Outdoor Emergency Care certification through a course run by the college. In addition to hosting a number of collegiate competitions, the Snow Bowl is home to the annual ski-down procession. The tradition, started over two decades ago, is the final event of a midwinter celebration in which graduating “Febs” (Middlebury students who began their freshman year in February) ski down the slope in their caps and gowns.
Adam Franco 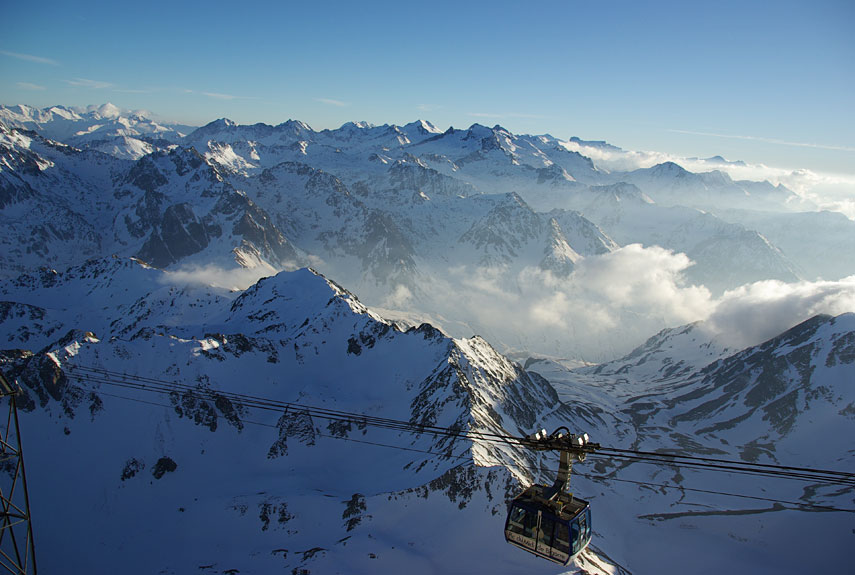 Pyrenees, France
Background: Pic du Midi is most famous for the namesake observatory at its 9439-foot peak. The first use of the mountain for research purposes began as early as 1774. In 1963, NASA funded a telescope to take pictures of the moon’s surface in preparation for the Apollo missions.
Why It’s Unique: A cable car transports both researchers and the public to the observatory, making Pic du Midi a desirable spot for extreme skiers and stargazers alike. While the terrain is advanced and completely unmonitored by officials, riders are required to sign a waiver before heading down the 3281 foot drop. In the past, use of Pic du Midi was forbidden without a professional mountaineer along for the ride, a recommendation that is still clearly posted on the site. Gear manufacturer Quiksilver has begun a partnership with the mountain to use it as an official test site for its extreme sports attire.
(Photo from flickr/jugurtha)
Quentin Dere/Flickr 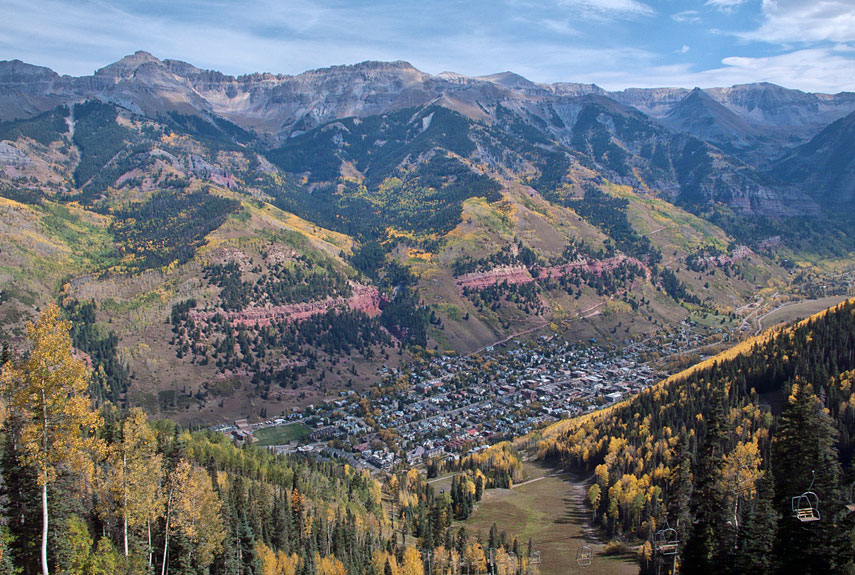 Background: With only 2000 acres of skiable terrain, 125 trails and a 4425-foot vertical drop, Telluride holds no records for size or steepness among North American resorts. But it impresses nonetheless. Its roots as a silver-mining camp and location at the heart of a box canyon make for a historically and culturally rich area with plenty of quirks and some of Colorado’s best powder. Plus, it’s passed only by Aspen for ski-slope celebrity spotting.
Why It’s Unique: Telluride’s main draw is its public transportation system: A free gondola that connects it to its sister town Mountain Village, and a midway point with access to hiking and ski trails. It’s the only one of its kind in North America. Another superlative: The Telluride Regional Airport is the highest commercial airport on the continent. While you’ll have to travel 45 miles before reaching the nearest stoplight, the city was actually the first in the world to have electric lights, as well as the world’s first alternating-current power plant. And two more fun facts to leave you with: There is not a single chain restaurant or shop in the city (woo hoo!), and the first-ever bank that Butch Cassidy robbed, in 1889, was in Telluride. He walked away with $24,000.
John Fowler 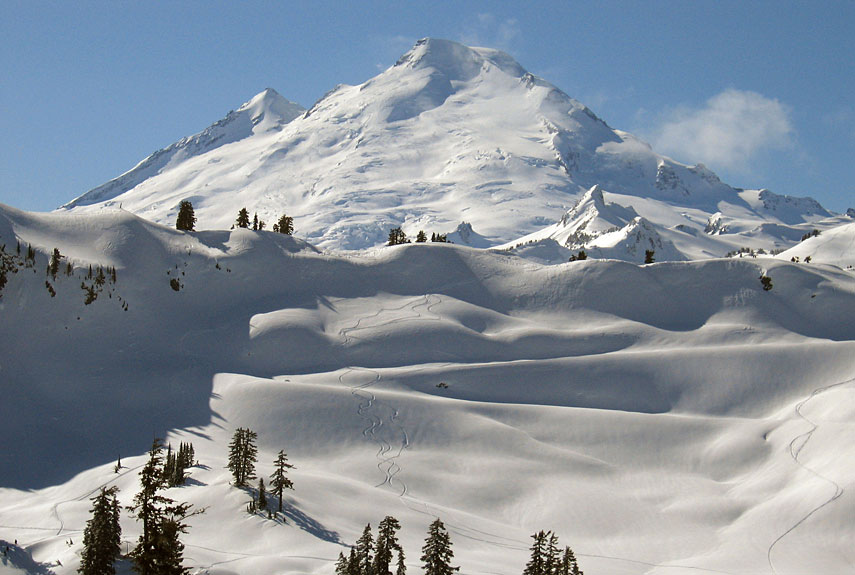 Mt. Shuksan, Wash.
Background: Mt. Baker is one of those small mountains with a big location. An hour from the famed slopes of British Columbia and two hours from Seattle, it is a low-lying mountain that serves as a low-key alternative to the flashy and commercialized resorts of most of its neighbors.
Why It’s Unique: At 647 inches of average annual snowfall, Mt. Baker receives more powder than other ski areas in the U.S. During its 1998 to 1999 season, Mt. Baker broke the world record for highest recorded yearly snowfall: 1140 inches. The mountain has no corporate sponsors, no TVs, no ATMs and no gondolas. Just snow. As host to the longest running snowboarding competition in the world, the Mt. Baker Legendary Banked Slalom, it is also often referred to as the birthplace of snowboarding.
(Photo from flickr/tellytom)
Thomas Gotchy/Flickr 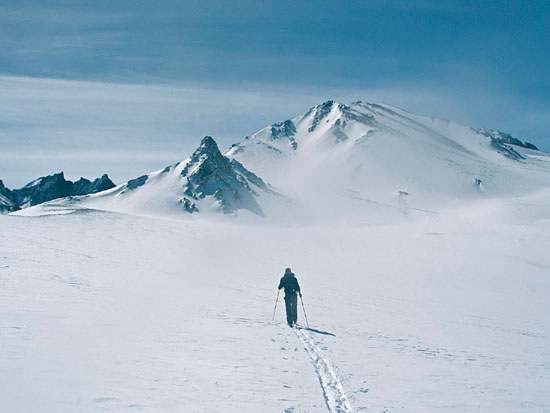 Afghanistan
Background: You wouldn’t expect Afghanistan to have a burgeoning winter sports industry, and you would be right. As of April 2010, downhill skiing debuted in Afghanistan and locals learned to do it. Now, they’re the guides at Bamiyan. The site is infamous as the resting place of 5th century Buddhas, dynamited by the Taliban in 2001. Some of its Buddhist pacifism is restored, now, however, and the slopes are a safe haven from the war. The natural dams of Band-e-Amir, and other scenic attractions, may spur a year-round tourism industry.
Why It’s Unique: While it’s clearly not earning resort status anytime soon, Bamiyan offers the no-nonsense skier a unique anti-resort experience—don’t expect to find chair lifts. Instead, hike up a hill and take a rare shot at entirely unexplored terrain, which of course comes with one big risk as well: watch out for avalanches. Niche travel companies are beginning to organize trips to Salang Pass, near Kabul, with stop-offs to Bamiyan using privately operating guides. Getting to Bamiyan involves a flight to Kabul and an 8-hour “road” trip via the Sibher Pass, however, it may be quite awhile before ecotourism finds a steady foothold.
(Photo from homeboyski.com)
Chad Dear 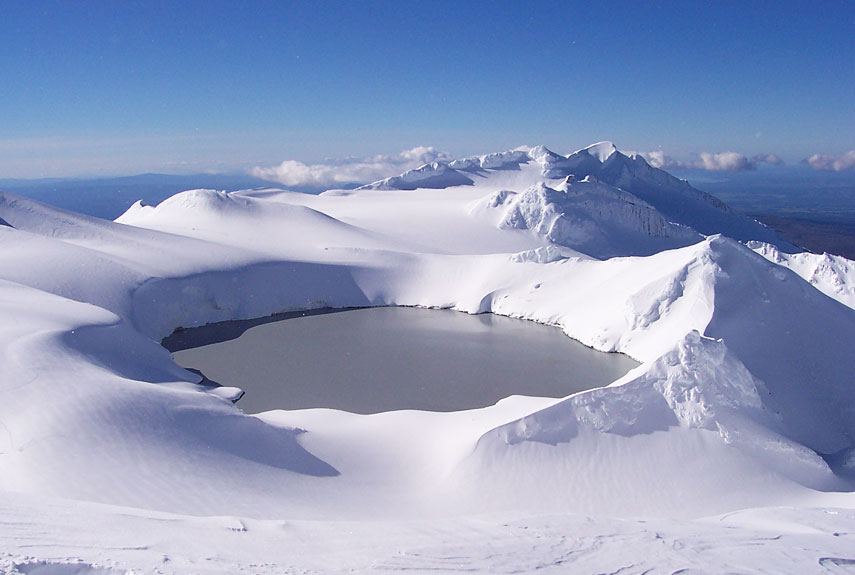 New Zealand
Background: Mount Ruapehu is actually made up of two separate ski areas: Whakapapa on the northwestern slopes and Turoa on the southwestern side. Whakapaka is home to Happy Valley, an enormous, world-class beginners’ facility with a separate ski school and cafeteria—an enticing feature for any non-beginners familiar with navigating past the bunny hill.
Why It’s Unique: Mount Ruapehu is one of three active volcanoes that together form Tongariro National Park, which is also a World Heritage Site. Coming in at 9177 feet, it is the tallest of the trio and it’s also a good deal more famous: You may remember Ruapehu as Mount Doom in the Lord of the Rings films. Ruapehu is the most active of the three volcanoes. During the last eruption, in September 2007, lava flowed down Whakapapa; a rock from the blast severed a climber’s leg. There is now an advanced early warning system in place, and lifts and cafes have been moved out of the path of the lava.
(Photo from martinhunter.co.nz)
Martin Hunter
Advertisement – Continue Reading Below 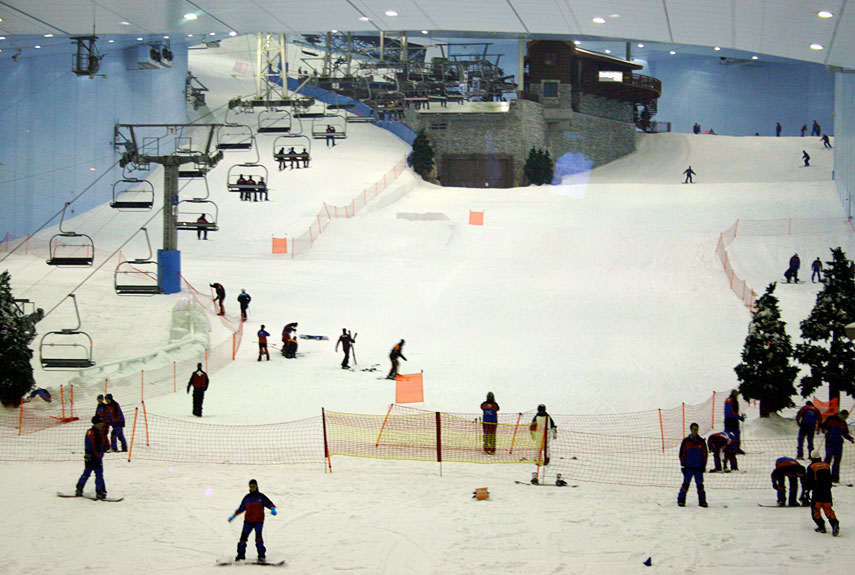 Dubai
Background: This completely indoor resort’s five runs and 22,500 meters of year-round snow brought skiing to the Arabian peninsula.
Why It’s Unique: There have been indoor ski runs in the past, but none has been as ambitious as Dubai’s, which boasts the world’s first indoor black diamond. Visiting the Middle East without snow gear? A lift ticket buys rental skis, snowboards, and suitable outerwear.
(Photo from flickr/twocrabs))
TwoCrabs/Flickr 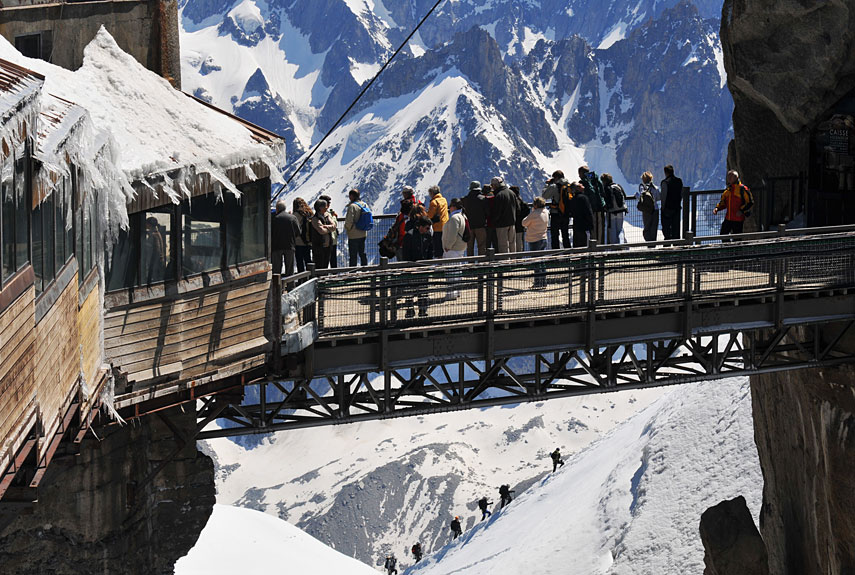 France
Background: The Chamonix Valley is actually composed of five separate resorts, which together form one of the most popular ski destinations in the world. It was home of the first Winter Olympics, in 1924.
Why It’s Unique: Chamonix is home to the Vallee Blanche, the famous 20-km backcountry trail that takes riders through the glaciers and crevasses of the Alps. The Aiguille du Midi is the valley’s storied cable car. Its first stage brings you to Plan des Aiguilles at 7425 feet, and those brave enough for the second, Aiguille du Midi station, will arrive at 12,405 feet with a 1970 foot climb between each tower. This is as close as you can get to Mont Blanc’s peak without climbing. Either turn back here or continue to a third stage, which eventually arrives at Pointe Helbronner, Italy—no passport required.
Sergio Lunardi 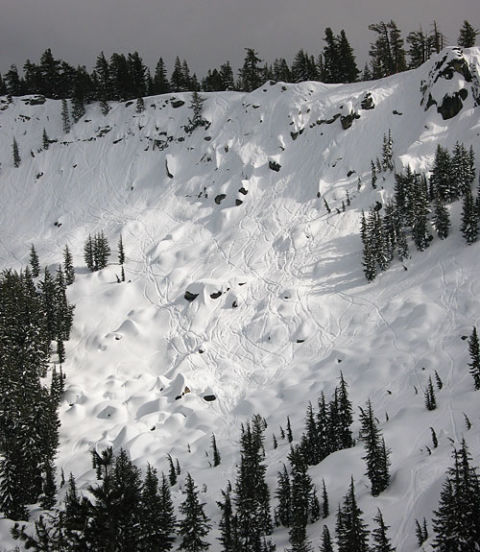 Sierra-at-Tahoe, Calif.
Background: The Tahoe region of California has no shortage of fantastic skiing. With 400 inches of snowfall a year, you’d be hard pressed to find better powder in the U.S. than at one of the seven resorts here. Huckleberry Canyon was the area’s best-kept secret—until Sierra-at-Tahoe scooped it up in 2009 and made the canyon part of its own.
Why It’s Unique: Before the resort adopted Huckleberry into its boundaries, there was no official access to the area’s 320 acres of expert-only terrain (including cliff drops, cornice drops, rock chutes and open bowls). Even with the addition of lifts opened up by the partnership with Sierra-at-Tahoe, it’s still a trek to the top, and any route down the all-double-black-diamond canyon still requires a significant hike back out. 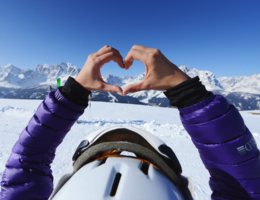 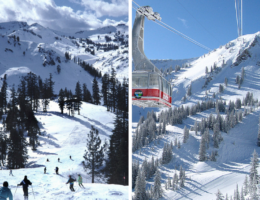 Skiing in May: Comparing the Top 10 Ski Resorts