Showcasing some the world’s most beautiful mountains, scenery and the methods to get there

Located in the Mad River Valley on General Stark Mountain in Vermont.

Mad River Glen is known for having only one of two single chairlifts left in operation and being one of a few “skiers only” ski resorts left in North America. MRG averages 250 inches of snowfall annually and offers skiers 45 named trails serviced by four chairlifts that vary from beginner to expert, but is best known for its expert tree skiing.

Mad River Glen first cranked up its now famous Single Chair on December 11, 1948. Roland Palmedo, the founder and an original investor at Stowe, envisioned a ski area where sport not profit would be the overriding concern. Roland believed that ” …a ski area is not just a place of business, a mountain amusement park, as it were. Instead it is a winter community whose members, both skiers and area personnel, are dedicated to the enjoyment of the sport.” Mad River Glen developed over the years with this vision of community as its foundation. 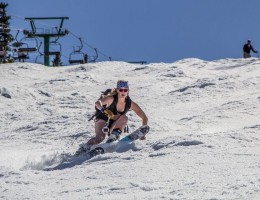