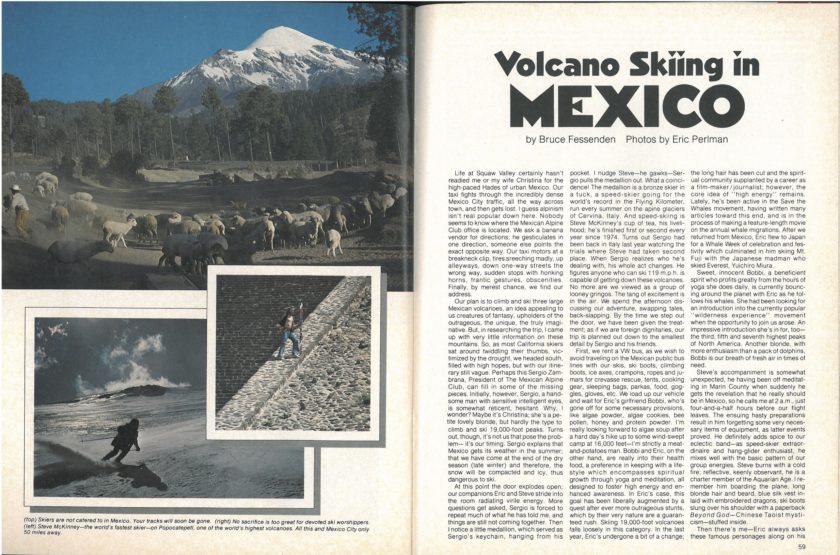 In celebration of POWDER’s 45th Anniversary, we are releasing select stories from every volume. This story originally published in POWDER’s December 1977 issue (Volume 6, Issue 4).

Life at Squaw Valley certainly hasn’t readied me or my wife, Christina, for the high-paced Hades of urban Mexico. Our taxi fights through the incredibly dense Mexico City traffic all the way across town and then gets lost. I guess alpinism isn’t real popular down here. Nobody seems to know where the Mexican Alpine Club office is located. We ask a banana vendor for directions; he gesticulates in one direction, someone else points the exact opposite way. Our taxi motors at a breakneck clip, tires screeching madly, up alleyways, down one-way streets the wrong way, sudden stops with honking horns, frantic gestures, obscenities. Finally, by merest chance, we find our address.

Our plan is to climb and ski three large Mexican volcanoes, an idea appealing to us creatures of fantasy, upholders of the outrageous, the unique, the truly imaginative. But, in researching the trip, I came up with very little information on these mountains. So, as most California skiers sat around twiddling their thumbs, victimized by the drought, we headed south filled with high hopes, but with our itinerary still vague. Perhaps this Sergio Zambrana, president of the Mexican Alpine Club, can fill in some of the missing pieces. Initially, however. Sergio, a handsome man with sensitive intelligent eyes is somewhat reticent, hesitant. Why, I wonder? Maybe it’s Christina; she’s a petite lovely blonde but hardly the type to climb and ski 19,000-foot peaks. Turns out, though, it’s our timing. Sergio explains that Mexico gets its weather in the summer; the dry snow will be compacted and icy, thus dangerous to ski.

At this point the door explodes open; our companions, Eric and Steve, stride into the room radiating virile energy. More questions get asked, Sergio forced us to repeat much of what he has told me, and things are still not coming together. Then I notice a little medallion, which served as Sergio’s keychain, hanging from his pocket. I nudge Steve—he gawks—Sergio pulls the medallion out. What a coincidence! The medallion is a bronze skier in a tuck, a speed-skier going for the world’s record in the Flying Kilometer run every summer on the alpine glaciers of Cervinia, Italy. And speed-skiing is Steve McKinney’s cup of tea, his livelihood; he has finished first or second every year since 1974. Turns out Sergio had been in Italy last year watching the trials where Steve had taken second place. When Sergio realized who he was dealing with, his whole act changes. He figures anyone who can ski 119 mph is capable of getting down these volcanoes. No more are we viewed as a group of looney gringos. The tang of excitement is in the air. We spend the afternoon discussing our adventure, swapping tales, back-slapping. By the time we step out the door, we have been given the treatment; as if we are foreign dignitaries, our trip is planned out down to the smallest detail by Sergio and his friends.
Read more at powder.com