The Best of Ski and Après-Ski in the Austrian Alps 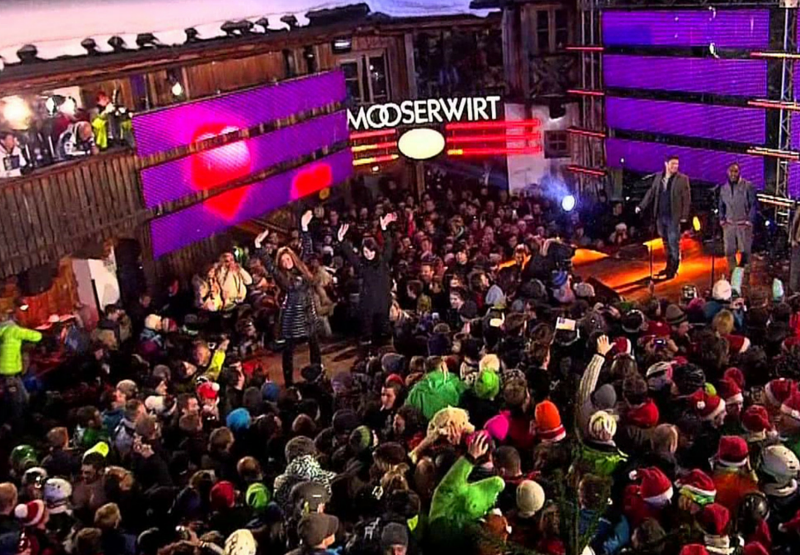 Contributor Natasha Hecher may spend her summers surfing in Mexico, but she spends her winters behind the bar in Austria’s ski town St. Anton am Arlberg. She breaks down how to spend a perfect afternoon on and off the slopes.

ST. ANTON, Austria – St. Anton in Austria is famous for its abundance of three things: challenging terrain, après-ski, and men (hence the nickname “Manton”). As a resident here for the last five years, I have extensive experience on both sides of the bar — serving for work and drinking for fun. In fact, if there were an official education for shenanigans instigation, I would have reached a doctoral level. When people blame me for their sore heads, I wear it as a badge of honor. A job well done.
As the ski season draws to a close, longer and warmer days make the après-ski (the art of rewarding yourself — extensively — with beverages after a hard day skiing) much more enjoyable. Which is to say you can sit outside on the terraces enjoy yourself without your tootsies getting cold or your beer freezing up. After much consideration and research (so much research…), I have constructed my perfect afternoon on the slopes, one where skis will be used solely as a form of transport. We will go from sophisticated glass tinkling to debaucherous Jägermeister guzzling in a happy stretch of six hours. If you are not dancing on the tables in ski boots by the end of it, you are not doing it right. 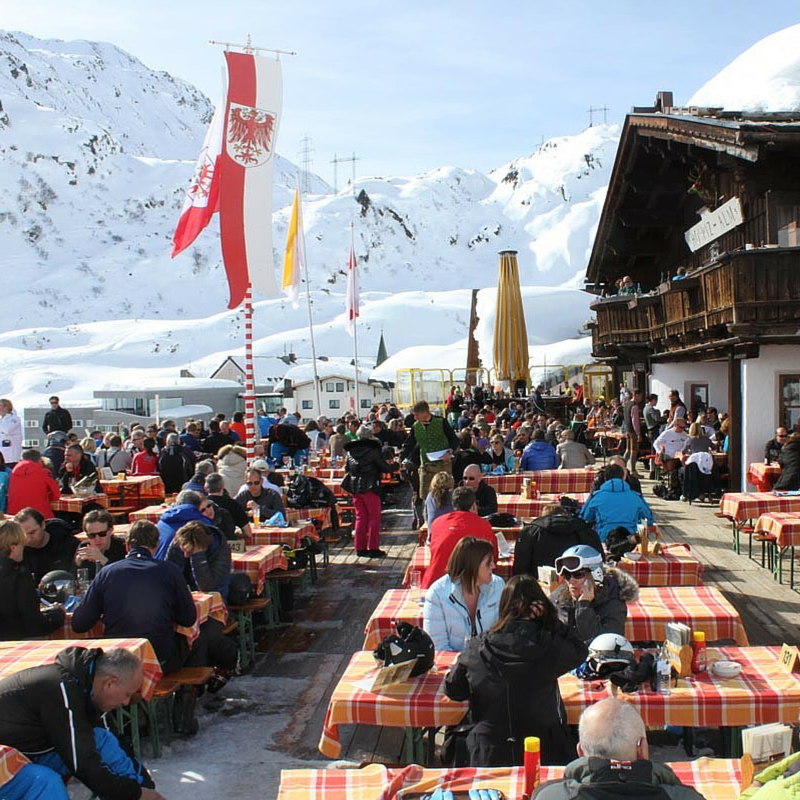 The terrace at Hospiz Alm. 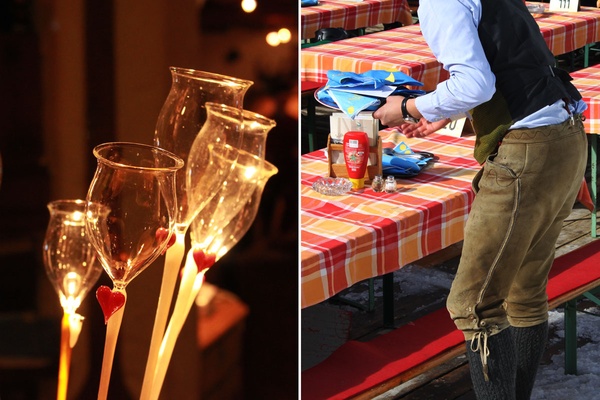 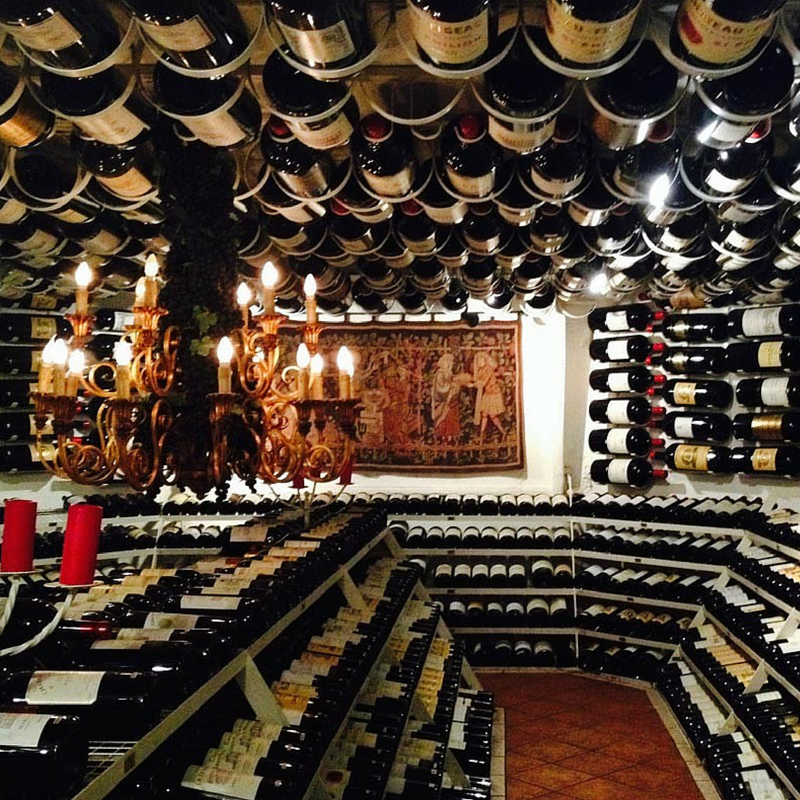 The wine cellar at Hospiz Alm with the biggest collection of large bottled Bordeaux wines in the world, ranging from 3–15 litres

Hospiz Alm
Located in St. Christoph, the westernmost point of Tirol, The Hospiz Alm is a very traditional Austrian restaurant whose walls are adorned with photographs of presidents, European royalty, celebrities, and other people who look really important. The vintage of some of the photos taken at the Alm and the five-star Hospiz Hotel give an indication of its beautiful schnapps-infused history. No hairstyle too coiffed, no boots too furry, and no one to give you shit about it. The interior is deliciously Tirolean with open fireplaces, candelabras, wooden paneling, embroidered pillows, and staff (both male and female) wearing traditional Lederhosen (best described as leather knickerbockers). The cozy decadence warms you to the core before you even have a drink. Speaking of drinks, I would suggest you start with Testarossa, a sweet red concoction made primarily with champagne by barman Karl-Heinz. (Of course, that’s his name. It just wouldn’t be the same if he was called Bob, would it now?) He is a sommelier, schnapps aficionado, and cigar expert. You know all those manly man things.

If you schmooze sufficiently, you may get a tour of the wine cellar. Dear reader, I tell you now: best to get your schmooze on. Downstairs is the biggest collection of large bottled wines from Bordeaux in the world, ranging from three to fifteen liters. And did I say “downstairs”? I mean “down the adult slippery dip,” which you also use to get to the bathrooms. It really is an adults’ playground — and looking around the cellar will make you schmack your lips. A word of warning: When you get back upstairs and are handed an oversized, extensive parchment-like wine menu, you are more than likely to throw caution to the wind. People have been known to get into a lot of trouble here.
Of course, this is all consumed on the terrace, where you can people watch, but don’t get too comfortable, as you need to finish up before the last lift so you can ski (and float a little) to the next venue. 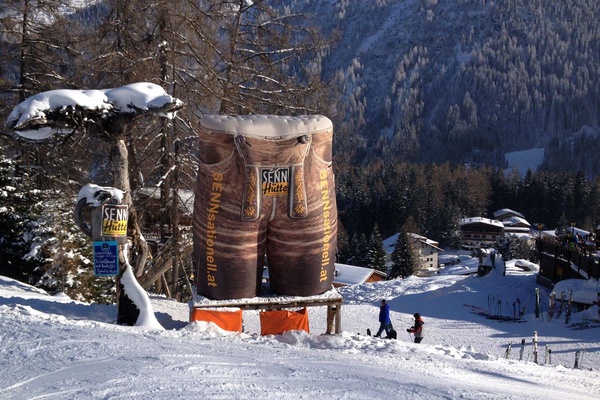 You can’t miss the entrance to Senn Hutte. 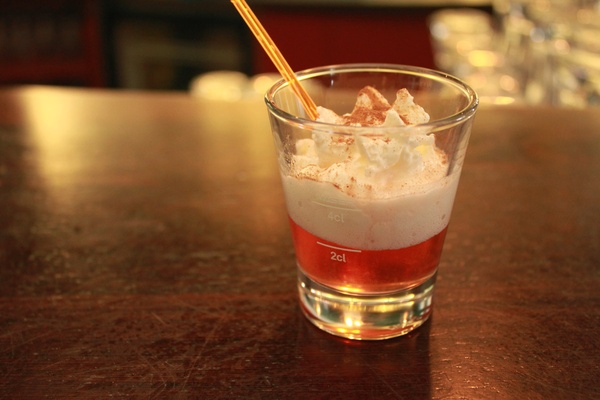 A “Heisse Witwe” made by Oscar at Taps.

You can choose among these three destinations as you continue the lead-up to your ultimate destination:
Senn Hutte
This is the first traditional après-ski bar on the piste that is en route to wherever it is that you may end up, where the waitresses wear traditional dirndl dresses, which are basically milk maid/décolletage-enhancing corset hybrids. The draw of this venue is the live music, and I would recommend you have your first schnapps here. You’ll be offered many schnapps at each bar, and I would start with a Pear Williams — a pear schnapps with a ball of pear. When you order it, you need to ask for “willys.” That’s right. In a resort nicknamed Manton, I am instructing you to order willys.
Taps Après-Ski
Taps is the only bar on the mountain with a happy hour. And even though you should already be a little happy, it would be rude not to, especially as they have deck chairs. But those deck chairs pale in comparison to the concoction served by the bartender downstairs. Oscar is a congenial and attentive Swedish boy who loves to make a drink called, Heisse Witwe (“hot widow”). This is a shot (if a very tame one) with warm cherry liqueur topped with whipped cream and cinammon sprinkles. You mix it all together and gulp it in one go. 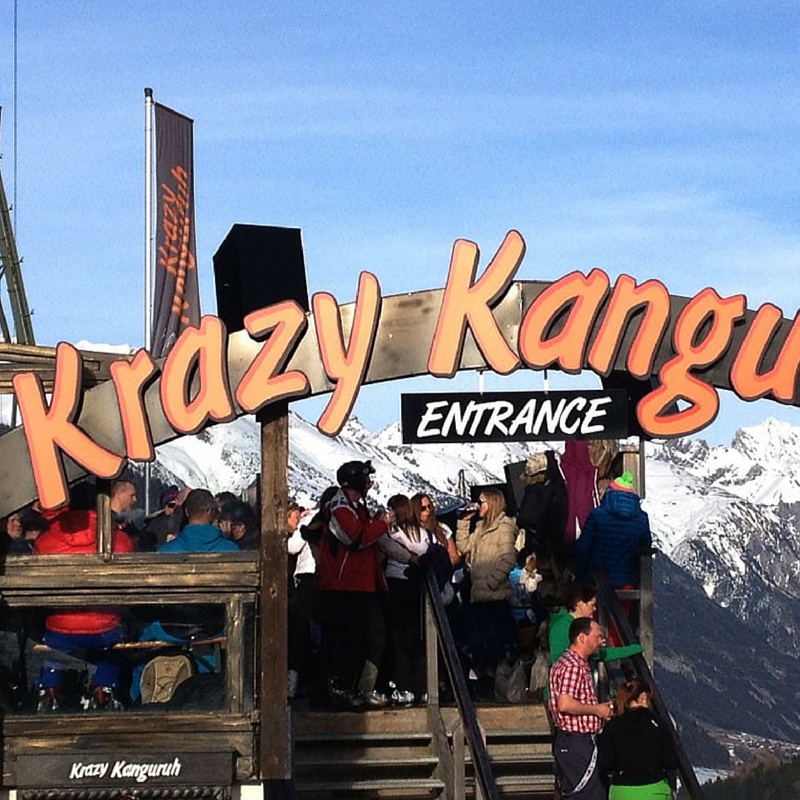 Krazy Kangaruh
If you could not tell by the quirky spelling, this is not an Australian bar. It is owned by local ski racer Mario Matt, who won gold in the slalom at the Socchi Olympics last year. Yes, this is your chance to see a real live Austrian ski racer in the flesh, and these guys are considered gods here. The bar is next door to Taps, so you don’t even need to put your skis back on (bonus). The music is more modern than you will find at the other venues and is a favorite amongst the English clientele. By now, if you haven’t picked up new friends on the way, you should be striking up conversations with strangers and having rounds of shots with them. A tip: When you cheers, you say prost and it is compulsory to look each and every person in the eye as you do so. The punishment if you neglect to do so is seven years of bad sex. When not drinking shots with new buddies, you should possibly sip an Aperol spritz, a refreshing mix of the Italian citrus liqueur, white wine, soda, and a slice of lemon.
When you are done here, it is a short ski to the next stop. At this point, sophistication should have all but abandoned you.

17:00
Mooserwirt
This is the most famous of all the après-ski bars, selling more beer than any bar in Austria per square meter. It is a phenomenal party every single day. As you approach, you suck in your breath: Approaching Mooserwirt in a half-assed manner will get you nowhere. All guns blazing is the only approach. Even though it is not everyone’s ideal bar, you need to try it. The first thing you should do is separate your skis or mix your pair with a friend’s and leave them at the front of the building. Not because thieves are rife, but rather because people reach such a level of inebriation that they will take any skis that fit. Next, you should try and find a place to sit. Anywhere. And stay there. The waiters will come to you. These waiters are incredible: They carry huge trays filled with beers and shots through the heaving mass of mostly German, Dutch, and Scandinavian men who resemble mountains themselves. Just a word of advice: Don’t ask to touch the waiter’s biceps if their girlfriend is in the proximity. Red wine is not easy to get out of pink fleece.
Now it is time for a Flying Hirsch, known in faraway lands as Jägerbombs. Jägermeister is very popular in the Alps as it provides you with fifty-six herbs and spices. (Just imagine the nutritional values.) Many establishments, such as Fang House, proclaim it is their house wine. When you couple Jäger with Red Bull, it’s party time. Have a few, and you’ll realize it’s time to get up on the table and dance, as your ski boots no longer feel heavy. Nothing does.
The music at Mooserwirt is called Schlager. (Have you noticed that everything that’s cool in Austria starts with “sch” (schlager, schnitzel, schnapps)? Even if you are not familiar with it when you arrive, you will know the words to most of the songs two hours later. And they will reverberate in your head for the following months. It is undiluted fun. 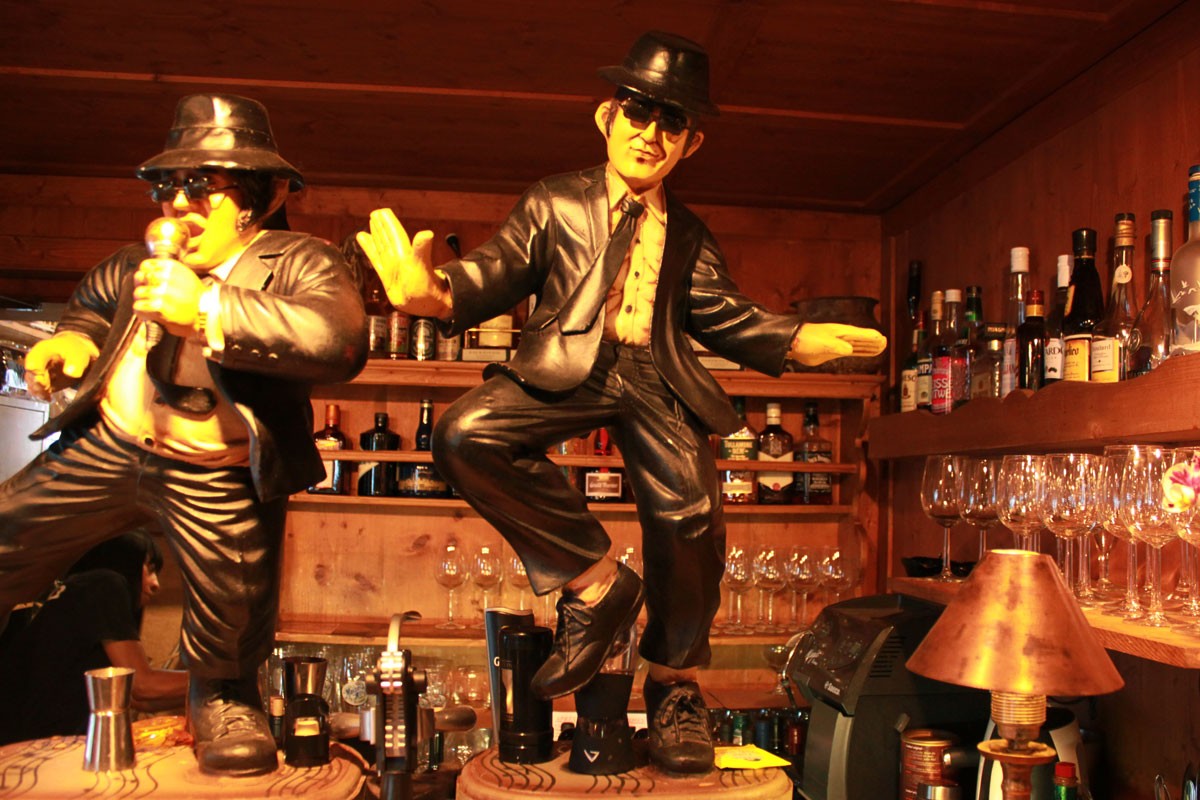 The Underground
When you can take it no more, and need something a little quieter (or the bar has closed, which all the après-ski bars do at 20:00), head to The Underground. This is an inviting ramshackle establishment where the Australian proprietor Joan (whose vintage could be anywhere from fifty to 140) sits on a throne in the corner like the queen of Sheba, taking no prisoners. A friend of mine said it best: “The sooner guests realize it is not a democracy, the better.” If you are too drunk, annoying, or argumentative or if she is not in a good mood, look out. I have seen her escort 6’7″ men out by the ear. (The trick is to get a good grip on the lobe with your thumb and index finger.) This year, she is armed with reinforcements, like water pistols. The food is delicious and varied, and the atmosphere is unique, with the live music going through the night. It is an après bar, a restaurant, and a supper club. I would suggest making a booking — and doing what you are told.
If you do not lock down here until closing, it is best to go home and change. Not only are ski boots forbidden in most establishments, but it is a dead giveaway of what you have been up to. Nobody wants to be that guy. 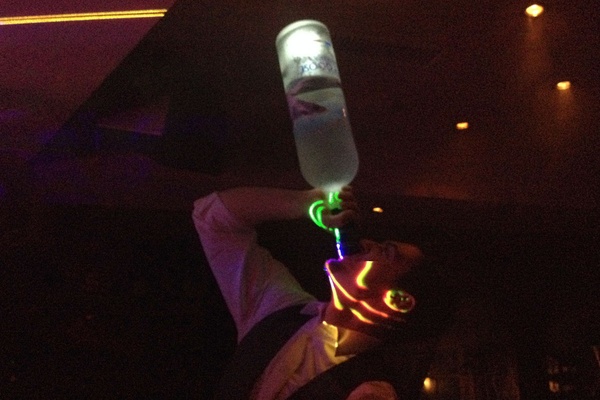 THE LAY OF THE LAND
St Anton am Arlberg is part of Tirol and the Arlberg, and your ski pass will also cover nearby ski areas like Lech and Zurs, which are a short bus ride away.
WHERE TO DRINK
Raffl’s
By far my favorite bar in St Anton. It is part of St. Antoner Hof, but not your usual five-star. Of course the service is exemplary: The team, led by the fabulous Bernd, is aligned to the customer’s needs. If you want a party, that’s what you get. Want to chill by the bar and have a snack? Perfect. Roaring fires, grand pianos, light shows, and flourish are all part of it. Bernd is an overly camp bartender who brings everyone (like me) back. He is fabulous, attentive, and sparkly, down to the crystal crown he likes to wear. His enthusiasm is contagious. The last time I saw him, he was annoyed about “some bitch nicking my Swarovski tiara” (say that with an Austrian accent), though he was still wearing his “Princess” apron, no doubt to protect his designer suit while he mixed my steak tartare.

Anthony’s
If you are looking for somewhere with cocktails where you can also hear yourself talk and perhaps have a dance, downstairs at Anthony’s is the place. Busy, with live music most nights, it’s a favorite among the seasonal workers. Try and get a booth.

Pub 37
This tiny pub can be amazing, but that usually depends on the other drinkers in there, as you really have no option but to talk to other people (which can be awesome). You can get to know them better over a game of shut-the-box, a drinking game that is totally reliant on luck. Pub 37 is another place where you can have a Jagi degustation, as they serve Jägermeister in bottles, shots from the machine, and of course the bombs.