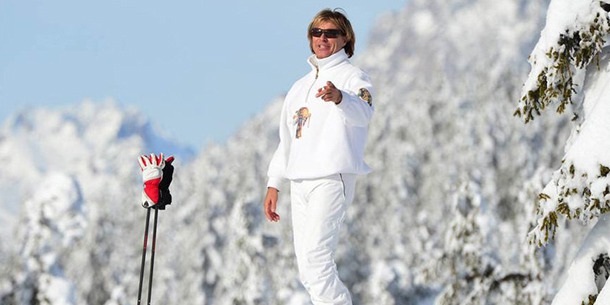 This article has been contributed by Natasha Hecher (Blog: EUROTASH – A dossier of Shenanigans)

1)  GO TO THE KRAMPUS PARADE
The season begins  on the 5th of December with a parade in the St Anton pedestrian zone of big hairy beasts on tractors looking for trouble. It could be mistaken for an English stag do looking for the next bar, but in this case the snarling, possessed brutes with the red eyes are looking for bad children to punish for naughtiness with their whips which are made out of freshly cut willow tree branches.

It is an Alpine tradition called Krampus, a perfectly logical yang to Saint Nicholas, and rather than the saccharine gingerbread “ho ho ho” crap with a smiling fat man asking you to sit on his knee, the children who prefer to listen to the voice on their left shoulder are pursued by The Krampalar, who travel on foot or by big chugging tractors.

Children of all ages provoke them and shriek with a mixture of fear and delight whilst spectators look on sipping hot mulled wine (Gluhwein) and eating warm gooey cheesy delights from the market stalls.

2) EAT A SCHNITZEL
In Austria, most things that begin with the letter “s” either taste, feel or sound good. Take Schnitzel for example. Not only is it a national dish, but “schnitzel” is such a sensational word. It can be used as a term of endearment, “oh Schnitzy, you were great last night” (referring to possible fornication, which funnily enough, the Austrian term for isSchnaxeln), when you make a mistake, “I totally schnitzelled it”, or you can just eat it.

Where could you go wrong with meat (traditionally veal, pork is also very popular and sometimes chicken) fried in egg, flour and breadcrumbs? It is not for the gluten free, vegetarian, or living life intolerant, but for the rest it is the ultimate comfort food. Normally served with potatoes, lemon, and cranberry sauce (Preiselbeeren) it leaves you so close to full that the only thing you have room for isStrudel. And possibly a Schnaps. Or two. And more skiing. 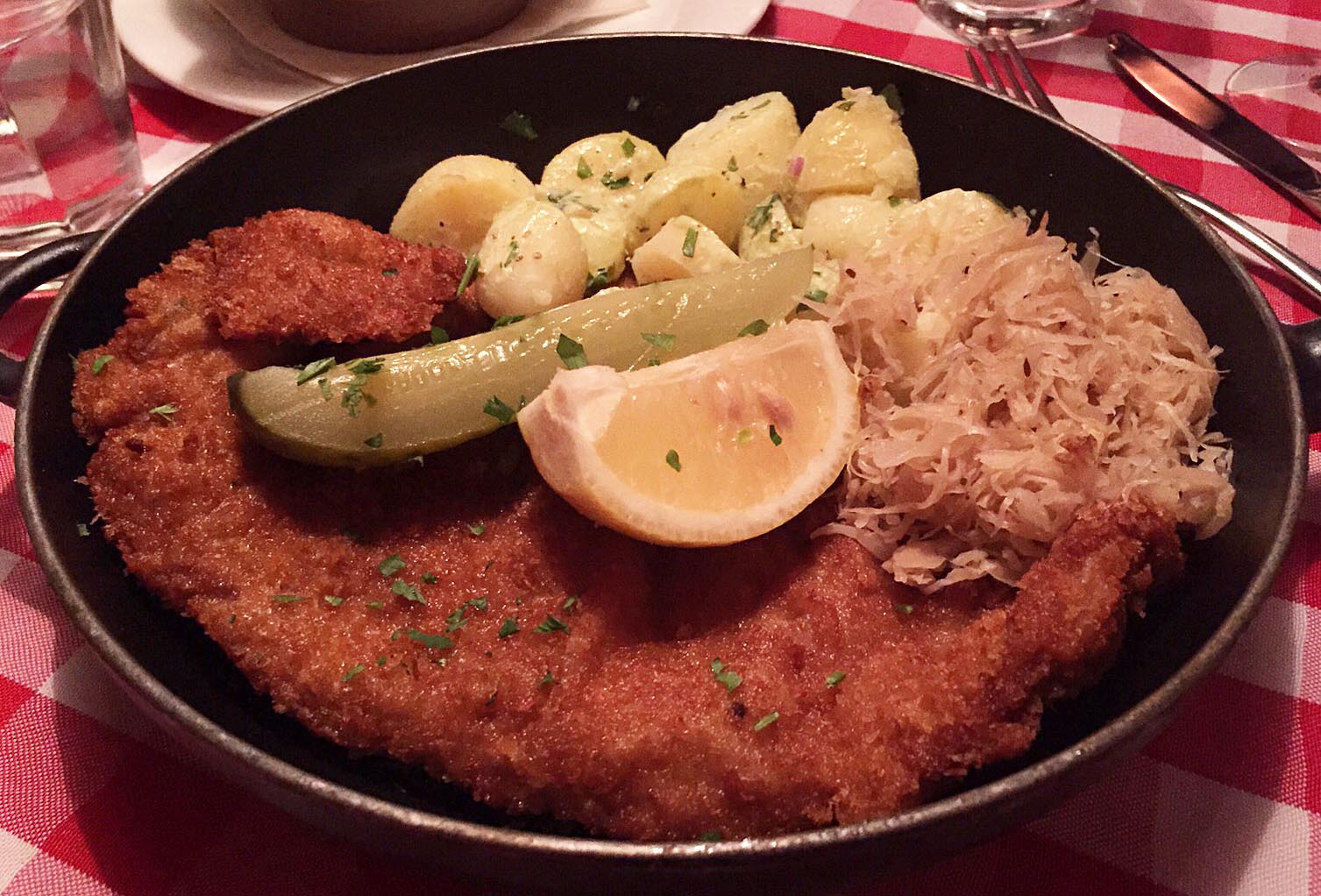 3) WATCH SOME ALPINE SKI RACING
Of course in this case I was going for Hirscher.

In Austria Ski Racers are Gods, so you should probably familiarise yourself with the machinations of racing. You ready? Got your pen and paper ready to take notes? Ok, here it goes. The guy who gets from the top of the mountain to the bottom quickest wins the race.

There are different disciplines and so forth, but it is easy to catch on. Most importantly, you must ALWAYS go for Austria: I don’t care how good looking Felix Neureuther is, he’s German, and if you are caught cheering for him in public you will draw ire from the locals. The one and only exception to this rule is Italian Racers from Sud-Tirol, as they are Tirolean, and the locals are first Tirolean and then Austrian.

If you can go to an actual ski race, the atmosphere is unrivaled.

4) LISTEN TO SOME AUSTRIAN MUSIC
Unfortunately, not all Austrian music is yodeling and Hansi Hinterseer. I know, I know. It should be. If they had living National Treasures in Austria he would be it. This yodeling ex-ski racer dressed in white with those beautifully coiffed locks is the ideal Austrian man. For Grannies.

Almost as cool as Hansi (but not quite) is Parov Stelar.   His wildly creative electro-swing music deserves to be  inducted into the Hall of Awesome.  Even better live.

5) USE TINDER IN SKI RESORT
Ski resorts are just like Tinder in real life, aside form the proportion of men to women. St Anton is referred to as Manton, and the Picadilly Bar is fondly known as Pickawilly.

So I was thinking, using Tinder could streamline the whole process. Rather than talking to randoms in the bars and swiping left in person, you could ask all the relevant information about prospective mates from the comfort of your abode, even set up a “Love-Ski” – an Alpine themed date. Then, when you get down to theSchnaxeln part of the night (more likely to be in a boot room than in front of an open fire) put on some Hansi Hinterseer as a mood enhancer.

6) HAVE A SAUNA
You should probably be warned though, the Austrian Sauna culture is something quite special. You go naked, and I am not talking about to the waist. I am talking butt naked: ding-dongs and Muschis (take a guess what that is Austrian slang for) on full display. If you are feeling really brave, you can do a whole day of nakedness, apparently referred to as “Wellness” at the Aqua Dome in Längenfeld. 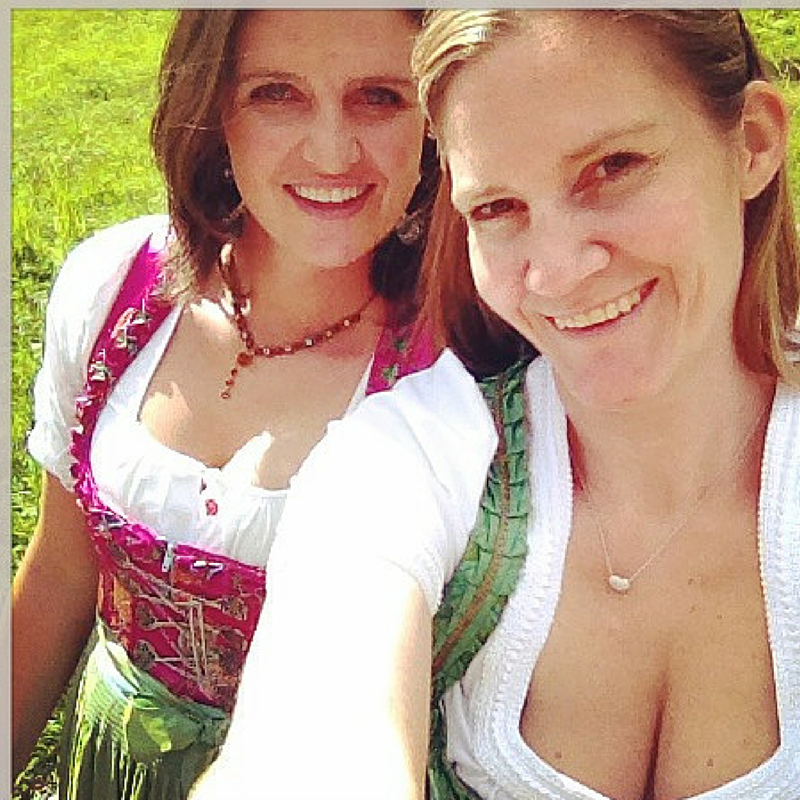 A DOSSIER OF SHENANIGANS of EuroTash

Dirndls and Lederhosen are traditional Austrian and Bavarian dress, which were not invented for Oktoberfest but for special occasions such as weddings, christenings and drinking. The beauty of a Dirndl is that it can make even the most pedestrian rack look tremendous.

They are well worth investing in, and even though they tend to be very expensive cheaper options are available if you go to a Trachtenwelt.

8) TRY A WILLY AT APRES SKI
No, I am not talking about an Austrian’s wing-wang, but knock yourself out. In this case I am referring to Pear Williams Schnaps, which is astoundingly popular during Apres Ski. Basically it is served in a shot glass, with a ball of pear on a plastic cocktail stick that you are to eat afterwards, to soften the taste. Some people toast the pears like a little sword fight (which occasionally progresses to miniature jousting tournament), others just ignore it.

Either way as long as you look everyone in the eye and say, “Prost” (cheers) before you drink all else is forgiven (not looking people in the eye before you drink results in seven years of bad sex). Try and order 6 shots of Williams in German and keep a straight face. “Sechs Willies bitte“. Tip for Apres Ski: doing it half assed is not an option.

9) WATCH THE WEISSE RAUSCH
The White Thrill 2012 – The first competition of the challenging triathlon -The Arlberg Adler- fascinates St. Anton’s winter athletes. The aim is to tame the “monster” Valluga. Lycra. Lots of lycra.

The “White Rush” will take place in St Anton am Arlberg on the 18th of April, 2015. This annual skl race, which is part of a unique “triathlon” called theArlberg Adler normally has 500-700 hundred entrants (strictly limited). Basically there are three different start groups, depending on age and category.

Everyone in that group starts together, and a kamikaze all the way to the bottom ensues, with a little hike in the middle thrown in for good measure. As if this isn’t challenging enough, when they get to the bottom of the mountain, exhausted, there is a huge crowd watching and they have to climb over a sizable mound of snow. Then they fall over the finish line half dead but happy to be alive (glass half empty half full thing) and wait for someone to give them a Schnaps.