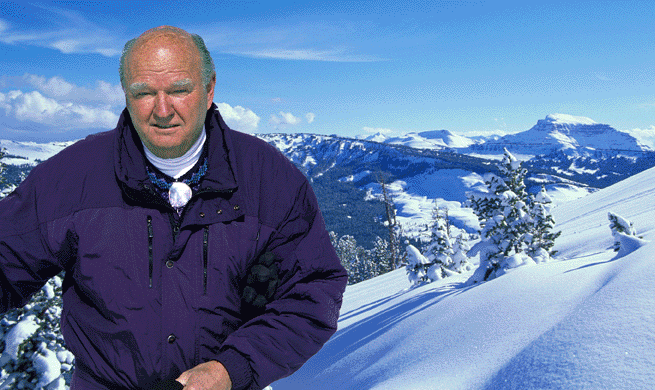 If Warren Miller movies were not part of your upbringing as a skier, you sure missed out on an annual rite of passage.

Attending a film screening of Miller’s was like an underground gathering for the ski world. The finger was always on the pulse. It was fun and inspiring.

The new book “Freedom Found” by Warren Miller and Andy Bigford tells the story of this master storyteller, spinning the tale of his life with the unique skill he honed over decades.

From a dysfunctional and unhappy childhood, Miller ultimately built an entertainment institution that took him to fantastic heights of both society and geography but also the ocean-deep lows of personal nightmares.

“Life was wonderful as long as I was not at home,” Miller recalls of his upbringing. “My early life did help me grow one talent: it sharpened my sense of finding ways to make money through entrepreneurship, though we didn’t know the word at that time. Hunger is a great training tool.” Along the journey, he ate any way he could.

Miller essentially created the Americana subculture of the ski bum. With that classic tow-behind teardrop trailer, he and Ward Baker camped in ski area parking lots and subsisted either on whatever wildlife they could shoot or the crackers and ketchup the could scrounge from the cafeteria.

“Miller won prestigious races as a member of the Sun Valley Parking Lot Ski Team and learned filming on the job.”

“In the Sun Valley parking lot, I liked the smell of rabbit frying above the totally silent evening. At the same time, I could look up and see the constellation of Orion high in the black canopy of winter nights. No one ever had it as good as I did then, except Ward Baker, who was cooking the rabbit for us at the time.”

When life was good, it was very good and wildly fun and exciting. Miller won prestigious races as a member of the Sun Valley Parking Lot Ski Team and learned filming on the job.

“I had absolutely no training whatsoever in motion picture production, no idea of how to go from my 37 100-hundred-foot rolls now sitting in their cans and end up with a final hour-and-a-half feature ski show on two 45-minute reels. I edited the film by blundering along.”

And then the finished product needed to be marketed, another area in which he had zero experience. The tale of dangling out of a fifth-story hotel room window and unfurling a banner announcing a premier only to be mistaken by a local television station for a suicide jumper was among the most absurd media antics. In typical Miller fashion, the story ended when he returned to his room after a successful show and closed the window.
Read more about Warren Miller at skiracing.com